Day two was pretty amazing.  I’m currently importing all of the photos from the GoPro, and I can’t wait to see this timelapse (This might be delayed, y’all.  It’s really big).  Kentucky continued along with rolling hills until Illinois (which I was in for all of about 10 miles).  Torrential downpours from the end of KY through the beginning of MO made the trip a little gross, but when the sky cleared up.

So you know how you know something will happen but you don’t know it because you just didn’t think about it?  Yeah, totally had that moment crossing the Mississippi.  To be fair, it was pouring and I’d just crossed several other rivers.  But there was definitely a “oh hey, look at that!” moment.

Crossed into Central time at some point.  Have no idea where.

Missouri was beautiful.  A little flatter than I expected at first, but then I entered the Ozarks.  Best part of the Ozarks:  passing all of the Laura Ingalls Wilder stuff while simultaneously passing Amish buggies on US-60.  For a hot second, it felt like being in an episode of Little House on the Prairie.  With cars.

Stopped in Poplar Bluff, MO at a Harps grocery store for a homemade hoagie.  Totally worth the stop.  Am starting to think I’ll stop at grocery stores instead of fast food joints from now on (except Taco Bell.  Please.).

Made it into Springfield in early evening and met up with my Couchsurfer hosts Melanie and Holly.  If you’re looking to do this same cross-country route, I highly recommend them as hosts.  Holly and Melanie, their two dogs, and one super fluffy cat made me feel quite at home. 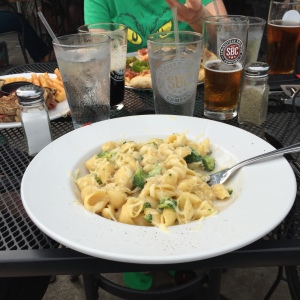 After arriving, they took me to downtown Springfield, which has a wicked cool college town vibe.  After dinner at the Springfield Brewing Company, we popped over to this amazing townie bar, the Patton Alley Pub, which was having a tap takeover by Mother’s Brewing Company, a local brewery out of Springfield (beers I tried:  McJagger Irish Red, Ruby).  Another friend of theirs, Devin, joined us, and we had a fantastic time.  At the end of the night, we returned to their place to marathon HIMYM and have a few more beers.

Congrats, Melanie and Holly, you have set the CS bar way too high.  I look forward to seeing if my next couple stops can compete!

Today I head to Amarillo, TX by way of Shawnee, OK (where I will be having lunch with my awesome Aunt!).  Leave me some love!

MPG Day 2:  25.65 for first tank.  Not sure what the second one is.  Given I was averaging in the 30s before I left, I’m going to blame weight and the untested cruise.  Other suggestions would be welcome.  This is making me angry.

Music:
Grouplove – Never Trust A Happy Song
Fall Out Boy – Save Rock And Roll, Folie A Deux, and Infinity On High
The Heavy – The Glorious Dead and The House that Dirt Built