The Apple Watch Sport and the (sort of) Perfect Month

If you had told me this time last year that half my laundry each week would be in the form of workout clothes, I would have laughed hysterically.  For me, exercise is something that often goes along with avoidance behavior.  Don’t want to write an article?  Jump on the elliptical (it’s work/productivity)!  It is also something that I tend to say I’m going to do starting around January, and by February, I’m sleeping in again.

The last two years have been a time of transition for me.  2014 was definitely the year to Get Happy.  And 2015 has turned out to be the year to Get Healthy.  Since last January, I have been keeping an eye on food and exercise in a way I never have.  And it shows.  I feel stronger and more flexible than I have since college, which is really my goal.  I haven’t been “dieting” or “cutting carbs” or anything–just eating slightly less, cooking at home, and making sure I move around more.  And yes, I’ve lost weight, but in healthy, consistent ways. 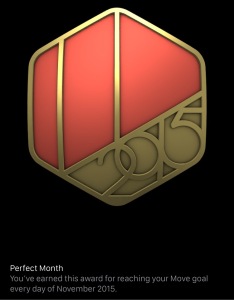 The Activity app gives you achievements.  They’re like Xbox achievements, but with less Cheetos and more going outside.

I’ve had an Apple Watch (38mm Space Gray Aluminum Case with Black Sport Band) since June and have come to appreciate many of its functions.  Without question, my favorite feature is getting navigation steps on my wrist rather than having to look down at my phone while driving.  But the apps I use most by far are the Activity and Workout apps.  For the first several months, I kept myself aware of the parameters it was monitoring–Move, Exercise, and Stand–but I really didn’t care too much about them.  But with the increasingly shorter autumn days and the lack of sunlight making me crabby (and knowing that exercise really helps), I made the decision to shoot for a perfect month in November:  290 calories of movement, 30 minutes of exercise, and 12 hours of standing/moving each hour for 30 days.  Looming holiday weight gain was also another motivating factor (last year’s for me was about 4 pounds).

First, some statistics:  I’m 30, 5’0″, and my basal metabolic rate is roughly 1352 calories per day (I’m currently shooting for 1200 calories of food a day if I don’t exercise).  I set a goal of 290 calories of additional movement per day–a goal that was totally doable on days I went to the gym (a “normal” gym day plus my normal movement gets me in at closer to 385 calories) but slightly difficult on days off.  These parameters allowed this 30 day challenge to myself to actually be a challenge.  Luckily, I had friends along for the ride to keep me on track (thanks, B, B, S, and T!).

And now, Some Things I Learned About Myself and the Watch in November:

So what does that say about the coming month?  I’ve already been challenged by my peers to keep going (and, conversely, to keep supporting them of course), but with all of the upcoming travel I have for Christmukkah, I worry that this will cause more stress than good (plus, not gonna lie, it’s gray and gross outside, and I just want to stay on the couch).  But the voice in the back of my head, augmented by writing all this up, is reminding me just how much better I’ve felt this month.  So yeah, I’ll probably try.  Plus, the app is already peer pressuring me in continuing…