“A Country of Contradictions” 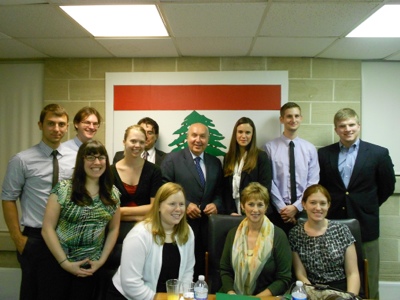 Sitting at Dulles, 9:13 PM EDT. Thought I’d get some thoughts down from today’s orientation at the National Council on US-Arab Relations.

It was a truly excellent day. The Council provided us the opportunity to speak with many individuals from all sides the US-Lebanese relationship. Meetings included a trip to the Lebanese Embassy, a meeting at Al Arabiya, a representative from the State Department, an individual from the Lebanon Renaissance Foundation (our co-sponsors), and other experts from the area.

It was incredibly awesome to reconnect with Josh, Dr. Anthony, and out of nowhere Mark, who had been the National Council Rep for MAL when I was a student, as well as a fellow Chief Justice of the ACJ. I have been connected with this organization since 2004, and I swear, I doubt I’ll ever *not* be involved with these programs.

There were so many themes woven throughout today, but the phrase I heard more often than not was that Lebanon is “a country of contractions.” In the same country, there are Shia, Sunni, Maronites, Roman Catholics, Jews, Druze; moderates, liberals, conservatives… All jumbled together in a democratically elected, Confessional government. It’s mindblowing.

My own research tends to look at personal status law, namely marriage, in Palestine and Israel. I had been wondering how much I would be able to look at this issue being in Lebanon, but judging form some of our conversations today, it seems that there will be a wealth of information in country.

I found it interesting that several of our speakers believed that Hezbollah is the most powerful non-state actor in the world. I suppose that makes a lot of sense, but I’d honestly never thought about it before. Hezbollah has a stronger military and far more missiles and weapons than many state militaries. And yet, Hezbollah’s popularity has gone way down since 2006, given their current support of Syria.

Speaking of Syria, another conversation turned to the role of the Arab League should any of the violence in Syria escalate or cause issues in Lebanon. The Arab League has changed dramatically in the last 18 months, for instance sending monitors into Syria from other Arab nations. For any of us who have done Model Arab League, the word “sovereignty” gets thrown around, you know that this is a big step for the Arab League. So the AL definitely has the ability to step in in some capacity, should Syria escalate further, based on this precedent. Then again, given the absolute slaughter that has happened so far in Syria, and given that the Charter of the League allows for the protection of all Arab people, the AL can easily have a leading role in the future.

So all-in-all, it was a wonderful, informative day. I have a cohort of fellow travelers that seem like so much fun, and I honestly can’t wait to stuff my face with Lebanese food. 9:58 PM EDT now. Boarding at 10:20; flying at 11:25. Insha’Allah, we will have a wonderful flight!