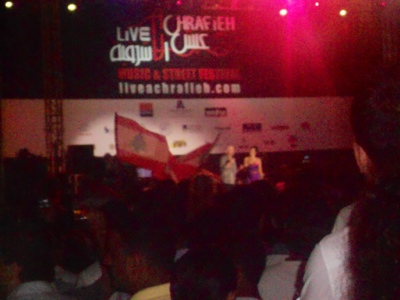 Stage at the Live Achrafieh Festival. Sorry the pics are so awful.

Last night, our hosts surprised us with a special outing, just up the street from our hotel. A square in Achrafieh (our suburb of Beirut) had been closed to traffic, and a full stage/sound system/jumbotron system was set up for the Live Achrafieh Festival.

I honestly didn’t know what to expect. Years ago, I attended the Jerash Music Festival in Amman, so I suppose I was expecting something along those lines–everyone in an amphitheatre, little to no dancing…

I was completely wrong. It was such a loud, noisy, joyous event. Free concert aside, people of all generations were in the streets singing, dancing, and waving Lebanese flags.

I can’t think of a concert would get a cross-generational attendance together in the same way in the States. Our group immediately integrated into the crowd, with many of our members dancing and interacting with people. I’ve got a short video here that really doesn’t do anything justice, but will give you a feel of the sounds of the concert.

The square in Achrafieh that the event was at has a memorial in honor of Bachir Gemayal, former Prime Minister of Lebanon assassinated in 1982. And yet, at this place commemorating such a sorrowful event, there was so much joy last night.

This type of event is part of why we are here on this fellowship. I think some people picture any sort of crowd in the Middle East as something violent, unstable, and unsafe. Throw flags into the mix, and you’ve got a horrible situation. And yet last night couldn’t have been farther from the truth. I’m sure I had a ridiculous grin on my face the entire night, just watching these people be so happy and joyous, enjoying their country’s music and showing pride in their home.