Thursday was truly a special day. Our schedule got mixed up a bit, so we all got to sleep in (yay!) before heading to the La Artisanat, an area of Beirut with lots of locally made products. I picked up presents for my husband and his sister and mom there. Afterward, we drove out to the Automobile Touring Club of Lebanon, a really fancy poolside club just north of the city near the casino. We had poolside sandwiches and french fries and toured the marina. There was a houseboat at the marina that I really wanted to steal for my father: 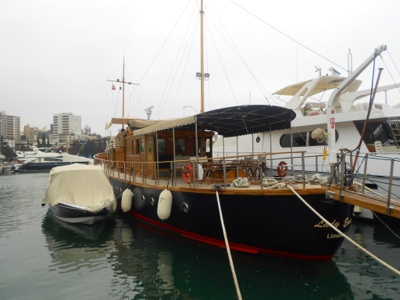 After the marina, we went to the US embassy. The location of the embassy is the second spot in Lebanon; the first had been downtown before it was bombed. The second, north of the city a ways, had also been hit by shells, and the burned-out shell of the original building remains. A memorial sits across from the original building, with the names of all the US personnel that died. The sign from the front door of the embassy is displayed on a concrete pedestal, still bent and damaged from the war.

Unfortunately, I have no pictures of the embassy compound, as nothing with a camera is allowed on the premises. The buildings on the compound are a hodge-podge of existing buildings the US rents, and all of the diplomats and foreign service officers (and their spouses–no kids) are required to live in the compound.

The memory of the embassy bombings is still strong. Employees and spouses are only allowed 6 hours of personal time off-compound per week and must vary their movements. With the United States’ policy against Hezbollah as a terrorist organization, work in Lebanon is difficult, as one cannot work with an entire portion of the government.

We met with foreign service officers in the political and economic office, who were very open to answer questions and elaborating both on their work at the Embassy and life within the State Department.

One of the most meaningful parts of the trip for me came from our meeting with Bill Corcoran, the head of ANERA, the American Near East Refugee Aid. ANERA is the primary NGO able to work within Palestinian refugee camps, assisting families with medicine, shelter, food, and education. They work very closely with UNRWA to distribute aid in Jordan, Syria, Lebanon, Israel, and Gaza and the West Bank. ANERA is the only NGO allowed to distribute aid within these areas (outside UNRWA. Bill was so great to talk to, giving us a very real picture of what is actually going on in the Palestinian camps now–families of 10 living in homes meant for 4, refugees from the 1948 war keeping the keys to their long-lost home in a special place in their current place of residence. Less than 1% of Palestinian youths now will go to college, in stark contrast to Palestine being a leader of education in the early 1900s.

After our meeting with Bill, complete with cokes and hot dogs (hot dogs with mustard, melted cheese, french fries, and corn), we went out to Music Hall, a club known for live music. Throughout the night (which didn’t even begin until 11 and was still going strong at 2 when we left), musicians would do a 2-3 song set. Between sets, dance music would play for a few songs. Culuturally, it was an amazing experience, observing liberally and conservatively dressed women dancing side by side, with everyone being familiar with songs in multiple languages. The music performed was primarily in either Arabic or English, but a few songs were in French or Spanish, showing the diversity of Lebanese in the diaspora. We came back around 2 to prepare for an early day at Parliament.

Like Loading...
This entry was posted in LSF2012 and tagged ANERA, Beirut, US Embassy. Bookmark the permalink.